I’ve often compared the art world to the mafia, with their mutual general secrecy, their deliberate cultivation of mystique, and their maintenance of respectable fronts for money laundering and worse. Then there’s the code of silence– certainly we don’t criticise our self-appointed superiors for fear of blackballing, but we should avoid offending our peers too, just in case they’re of use to us later. Whether somebody is of use, of course, being the psychopathic standard by which the most successful artists, curators and gallerists judge each other and everyone else. Most reviews of contemporary art are so bland and uncritical (in every sense of the word) that they could charitably be called reports rather than reviews, if we quite reasonably define a review as a critical assessment. Very often supposed art critics or arts writers seem to be following a prim “if you can’t say anything…

Yes, it’s back. Even more dramatic readings of the worst artist statements, gallery press releases and art criticism, this time with a police show-on-VHS-tape twist. Watch new arty farty perps and syntax villains brought to justice every two weeks or so. In this episode, we learn how it’s possible to write four paragraphs and nearly four hundred words about a man who built some walls. But wait… he built some walls in an art gallery that already had walls. Is your mind completely blown?

You can play along with your Artbollocks Bingo card, and you can watch more Artbollocks Theatre here on the blog or on my Vimeo channel. I tried really hard to mispronounce all the foreign words and jargon, but I think I still accidentally said some of them correctly. Sorry about that.

Presented at ISE Cultural Foundation, the site-specific installation Time Would Not…

Courtesy of one Nickolas Calabrese and the Art-agenda [sic] mailing list from the reliable nonsense mongers at e-flux. There appears to be little or no information available online about Mr. Calabrese, although in May 2012 he was described as an “artist and philosopher”. Please, no. By this week he was just an “artist and writer in New York.” Maybe the philosophy didn’t work out. Somebody’s intern, possibly? His oeuvre so far amounts to three reviews, but each of them is loaded with clumsy metaphors, malapropisms and other examples of what not to do in professional writing. Art-agenda apparently has editors. I feel like invoicing them for doing their job. I’m just reproducing the greatest (s)hits here; you can read the reviews in full elsewhere if you’ve nothing better to do.

“The site of the apocalypse is not spatial, but temporal…

On the 23rd December 2014 I received the following image via the e-flux mailing list, that persistent inbox botherer nonetheless much loved by me for reliably delivering sheer gibberish art reviews and spambot-grade gallery press releases for me to make fun of. I have e-flux to thank for much of the nonsense to be featured in the forthcoming third series of Artbollocks Theatre. 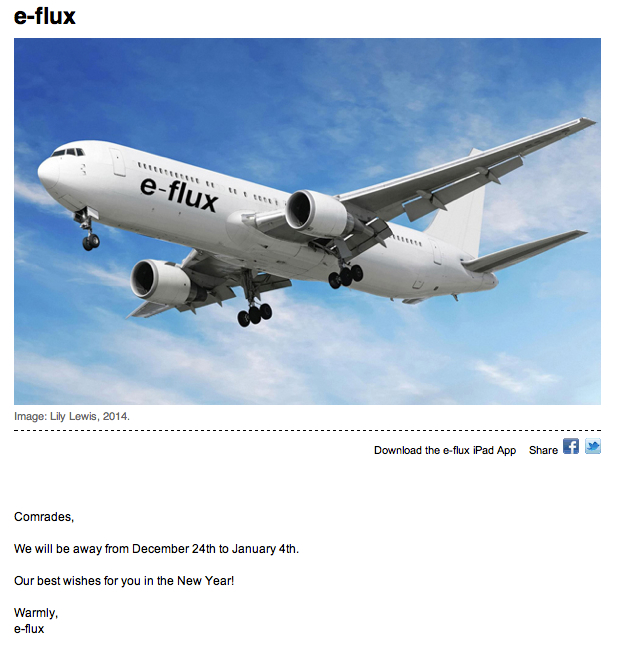 On the 24th September 2014, this image was uploaded to my blog. It originally featured in an episode of Artbollocks Theatre, in mockery of an artist who supposedly created “surprisingly deceptive planes.”

Wow, not only plagiarism but inferior plagiarism. Shia LaBeouf-tastic, my e-flux “comrades”! Nice to know you’re such fans of my blog, though. But maybe for her visual gag– such as it is– to work Ms. Lewis could have spent another thirty seconds in Photoshop to make sure…

The New York-based group W.A.G.E. have for some time been advocating better pay and conditions for artists, and more accountability by the organisations and businesses who profit materially from their labour. Now they’ve launched a certification system for places that meet their guidelines of voluntarily and fairly remunerating artists. I won’t add too much commentary because I suggest you go over there and read it all if you’re an artist or you work with artists, whether you’re based in the USA or not.

Among all the professionals who participate in this economy, artists are often alone among those whose contributions go uncompensated. While many non-profit arts organizations provide fees to artists for some forms of participation, fees are rarely provided for the most basic contributions artists make. Exhibition budgets include compensation for curators, writers, insurers, shippers, designers, printers, preparators, caterers and event organizers, among many others, but rarely for the…

An unfortunate side effect of cities like New York and London being internationally important to culture, innovation and the arts is that they also have more world class twats per square mile than anywhere else on Earth. Google Glass users have already become proverbially obnoxious Glassholes (and people are already taking steps to jam their nonsense, albeit only so far in a conceptual, provocative way), but really the specific New York Glasshole in question is just a stepping off point for a splendid and articulate rant by Omer Shapira, titled Nobody Goes to Art School to Make Money, so Fuck Off. Obviously an person after my own heart.

Although, as it happens, I agree with Shapira on Google Glass and its ilk as well. When you’re interacting with a real human being to their face, your phone or camera or whatever should not be anywhere… 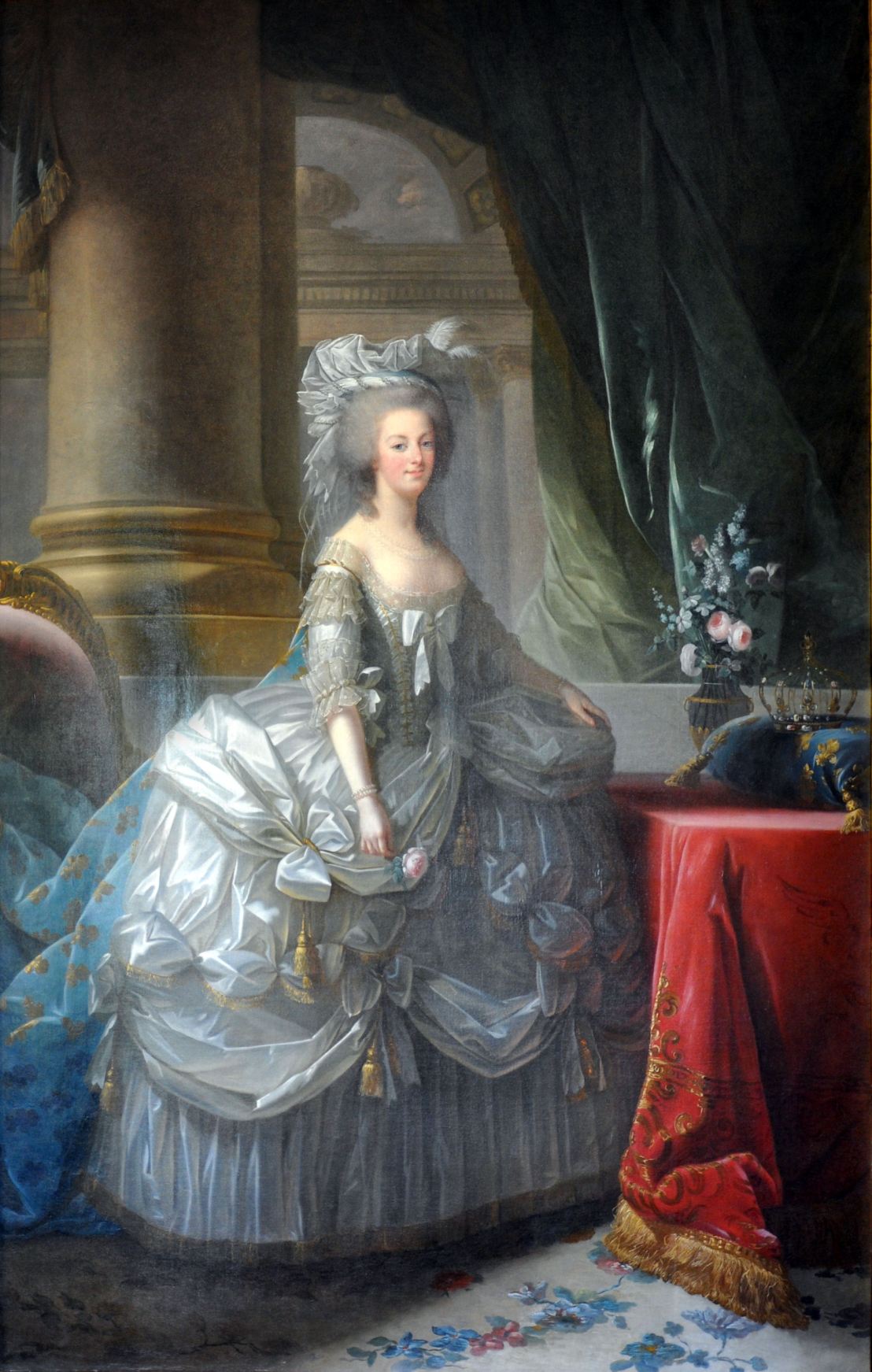 Supposedly to tie in with the opening of the Frieze and Gap Art Fair in New York– but really apropos of nothing except “ooh, rich people”– somebody called Jason used their own drool (he also contributes to human-shaped joke Tyler Brulé’s Monocle. QED.) to write out a super-duper tip-top list of “the most powerful people in the art world” for The Guardian.

It’s the usual soul-crushing litany of scumbags, twats, con artists, plutocrats and fuckwits but the real enjoyment is to be found in the torrent of vituperation and scorn in the comments. Read them all because there’s some good stuff about the chasm between this tiny, elite art world and what most real artists do or want to do, and what the public wants from artists. Here’s a few of the best comments, complete with the typos from their authors (rightly) being so angry they couldn’t quite…

Following her recent ouroboros of star-fuckery with Jay-Z at his minstrel show for New York city’s art royalty, insufferable has-been and exploiter/abuser of low paid performers at LA MOCA Marina Abramović (brilliantly and succinctly demolished by Hrag Vartanian in this article as “the art world’s version of late Elvis”) has recently engaged in another act of “Abramović Method” mirror-in-mirror narcissism with the prolifically untalented Lady Gaga. The original video is absolutely bloody ghastly and evokes every bad undergraduate performance art piece ever made, but luckily somebody jazzed it up a bit with a Yakety Sax soundtrack. Much better.

Some more quotes from the book Collecting Contemporary Art, published by Taschen. All by Marcus Glimcher, at the time of the book’s publication an art dealer at PaceWildenstein, New York (now the Pace Gallery). It’s all interesting stuff, but there’s something about his explication and grammar that makes me think of Patrick Bateman in American Psycho, patiently lecturing the back of a guest’s head as a preface to suddenly embedding a fire axe in it.

“The art market is not really a market; it’s too small to qualify as one. Furthermore, if it is a market, it’s a market of uniques. Therefore, there is no true comparability between prices. Finally, it’s a market of Geffen goods which is what gives it such strange characteristics. Geffen was a nineteenth century economist who said that there are certain goods that will disobey the basic laws of supply and demand that…