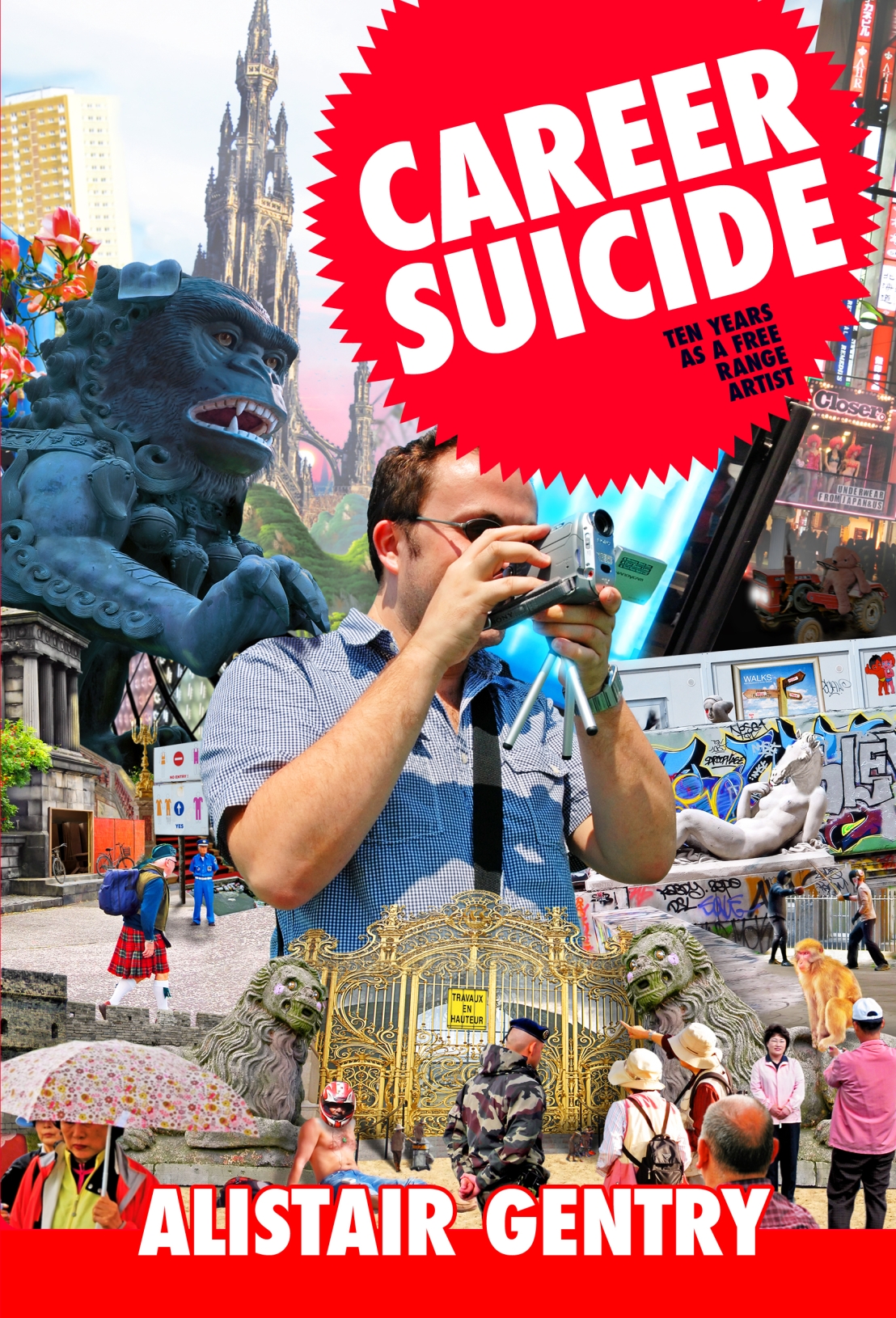 It also answers some of the questions that outsiders often ask about contemporary art, and some that they don’t: Why do some artists spend their whole careers doing stupid stuff like mutilating mannequins or painting old bits of wood with baffling phrases? Why does everyone in the art world get paid, apart from the artists? Why do most art students spend years doing their MA, closely followed by them doing sweet FA? Who are the HoWiAs, and what the hell do they think they’re doing? How and why did a bunch of paintings that looked like vandalised portraits of SpongeBob get taken so seriously at an international art fair?

It’s available in paperback and hardback editions. These barbarically archaic and decadent printed versions are available from Lulu, Amazon, Barnes & Noble and Ingram. The ePub versions are all DRM-less, reasonably priced and available directly from Lulu, or from Amazon, or from the Apple, Kindle, NOOK and Kobo stores on your device.

To buy it, visit my book shop or the Apple store, Amazon, or your ebook store.

CONTENTS OF THE BOOK:

In which I compare being an artist to being a chicken on a farm, a butterfly, and Toshiro Mifune, and I invoke both Sturgeon’s Law and Godwin’s Law of Nazi Analogies within the first twenty pages. I explain that the book is one result of my ridiculously retentive memory, and furthermore that this may cause less memorious people a certain amount of discomfort.

In which I castigate (among others) dabblers, plagiarists, the makers of blog-art, the many galleries who rip artists off by asking them to pay for the privilege of even having their work considered, and the stupidity of the artists who actually pay. An exhibition is successful and the people of Hampshire discover that some women are not ladies.

3. A BLACK FACE IN BERWICK

In which my house burns down, I voluntarily and of my own free will move to Berwick-upon-Tweed, an artist outstays his welcome and proves that no good deed goes unpunished, Health and Safety regulations are violated repeatedly, and my German flatmate and I contemplate the contagious misery of the British people, AKA inselaffe (“island apes”).

In which I am flown to Japan by people who apparently have no wish to speak with me or employ me, I discover that even in Japan strangers either think that they know me and/or that I know everything about everything everywhere, I subsist almost entirely upon ramen and nutritious jelly packs, and I discuss the sad fact that Japan is the only country in the world where artists and writers are officially considered priceless and irreplaceable national treasures.

In which I exhibit some films at La Biennale di Venezia despite the best efforts of Frieze Magazine and an artist who has a fax from his gallery that says he mustn’t ever do any work, I am forcibly entertained at the Welsh Pavilion (whose artists are mostly not Welsh), and a party for the art world’s elite ends in destruction, a horde of nasty drunks, and visits from the local police and the local priest simultaneously.

In which I travel to China, find myself dumped by the side of a Beijing orbital road, I ride in cars with total strangers who look like gangsters from a John Woo movie, become a lifestyle accessory for the new Chinese middle classes and receive the adoration of Little Emperors.

In which I explain that Dolly the sheep is not entirely real, that Enlightenment is hard, and why even the world’s leading geneticists are not above a puerile tit joke.

8. SHENZHEN: THE EMPIRE OF FUCKDUP

In which I masochistically return to China and face the consequences, including censorship and surveillance, smog, equipment that’s broken before you even buy it, a gallery that hasn’t been built yet, backhanded compliments about how fat I am, a party thrown by the British Council that’s like something from the colonial era, an eight hour car journey listening to the same three CDs of horrendous Cantonese AOR, and gallery staff who don’t bother turning up for their own jobs.

Read an extract from chapter 8 here and more about Shenzhen here.

9. ONE HUNDRED DAYS OF SOD ALL: BEING AN ARTIST

In which I visit Frieze Art Fair and discover some very bad art offered by very bad galleries for sale to some very bad people, I reflect upon the time an artist spends “resting”, and I contemplate the idea that many of an artist’s victories are Pyrrhic ones.